Delivery is a physical process that most women come to experience in life and is a crucial step in human reproduction. Waterbirth, as a natural delivery method, although an ancient practice, was relatively recently incorporated into modern obstetrics. FREDERICK LEBOYER in France since 1960 refers to the use of water during childbirth and especially in the baby’s bathroom after childbirth, while MICHEL ODENT has also installed swimming pools since 1977, whether it was developed in the hospital or at home. But it’s not just the newest proponents of water birth that have been mentioned. There is evidence of the use of water immersion as a therapeutic medium for physical and psychological illnesses by the Chinese, Egyptians, Japanese, and Assyrians, as well as Greeks and Romans. Nowadays, it is the most common method of natural childbirth where more and more women are choosing it since it is scientifically recognized throughout Europe. Over 6/10 women can use with safety the water immersion during their labor and they suggest it also as a very satisfied analgesia method.

Many women choose to give birth in the water while others choose to go through the pain in the water and get out of the bathtub at birth. More specifically, it is important to immerse in water when the mother has entered the active phase of childbirth (cervical dilation about 4-5 cm) and to complete it a few hours after the birth of the newborn. Other mothers prefer to go through only the first stage of childbirth, ie dilation and contractions, in the water while they go out to expel. Zanetti-Daellenbach et al. revealed that water deliveries performed in a selected low-risk collective needed less analgesia had a shorter duration of first and second stages of labor, a lower episiotomy rate, and were not associated with any adverse maternal. Specifically,  the 1st stage of labor was shorter in waterbirths compared with vaginal delivery with epidural analgesia but the 2nd and 3rd stage of labor were shortest in patients having waterbirth compared with conventional vaginal delivery and vaginal delivery with epidural analgesia. 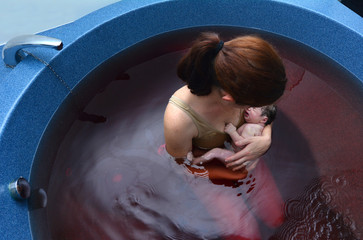 But let’s see all the benefits from the beginning. Which are the advantages of water immersion?

When we can’t use water as a childbirth or analgesia method?

Water can be used in all low-risk pregnancies in the development of a spontaneously birth. Every birth is a challenge for the mother and has difficulties, but it can be overcome with the right tools. Using water is such a tool.

Reflexology relaxation during pregnancy and labour

Nowadays many women would like to labour without using drugs such as narcotics or epidurals, and are interested in complementary therapies to help them manage the pain of labour. Reflexology is an ancient treatment method, an extremely effective form of therapeutic massage, which works by applying pressure to specific reflex points on the legs, hands […]

Prenatal Psychosis. What is it? Which are the symptoms?